Are you a drone or quadcopter enthusiast?  Trying to build your own kick-ass quadcopter that will soar high and move fast?  Then you need to really understand the thrust characteristics of your motors and make sure it can generate enough thrust to provide sufficient lift and forward movement.

Jim Grubb, the VP of Emerging Technologies Marketing and Chief Demonstration Officer at Cisco Systems is one such enthusiast, who uses our iLoad TR USB load cell system to characterize the thrust applied by the motors and uses the iLoad Mini load cells to measure the weight and balance of the quadcopter to make sure it is properly balanced so the motors do not have to do extra work to rectify the imbalance resulting in reduced fuel efficiency.

The weight of the quadcopter is supported by the thrust generated by each of the four motors at the four corners.  In addition by varying the speed of the rotors, one can make the quadcopter lean forward or backwards or sideways in order to move in a particular direction and apply "forward" thrust. 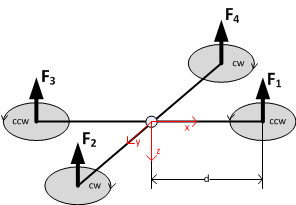 In order to test individual motors and their effectiveness you can create a test stand using our iLoad TR load cells as shown below: 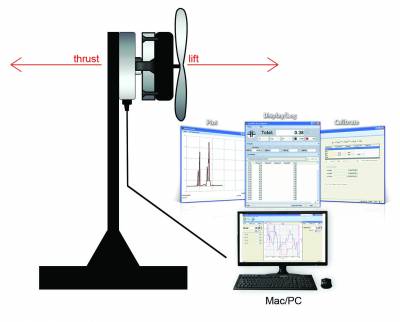 As the rotor RPM is increased, the thrust generated goes up.  As the thrust increases, the quadcopter feels the lift and the weight felt by the iWeigh scale goes down until the weight reaches zero at liftoff.

In addition to the individual and total thrust, one can measure the weight and balance of a quadcopter by using four iLoad TR USB load cells at the four corners as shown below. 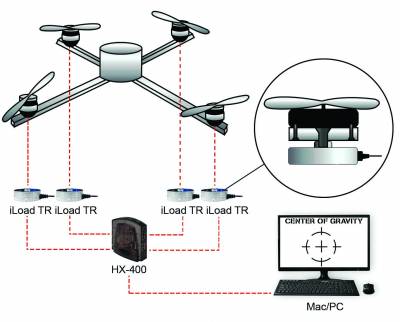 The LoadVUE Center of Gravity software displays the individual weights at the four corners as well as calculates the location of the center of gravity between the four load cell locations! 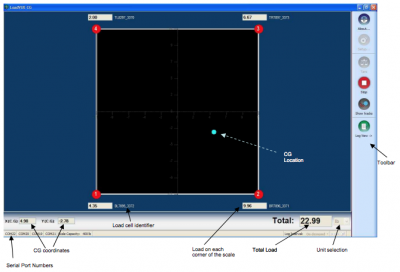 Here is a short video that shows the actual test we performed:

We also offer solutions for Rocket Thrust Force Measurement. Please take a look if that is what you are trying to do.